It always starts with a seed of an idea

It always starts with a seed of an idea.

Our community is rich with dedicated educators ready to roll up their sleeves and dig in to cultivate the conditions to grow the next generation of STEM innovators.  This week educators from Oxnard School District, Rio School District and Hueneme School District gathered with OC STEM Project Acabado at Oxnard College to learn together.  These districts are part of the SHELL Program, National Wildlife Federation’s Eco-Schools USA Program.  The Schoolyard Habitat Environmental Learning Labs (SHELL) deepens student, community and teacher engagement in hands on STEM learning.  They really do get their hands dirty because they will be creating and restoring wildlife habitat on school grounds and creating outdoor classrooms for project-based learning opportunities.

Ventura County has rich natural resources.  It is the growing grounds for the avocados, lemons and strawberries you’ll enjoy across the country.  Many of the families in our community make their living contributing to the ecosystem of workers and scientists that bring food from the field to the fork.  There are so many career opportunities: soil scientists, chemical engineers, horticulturalists and environmental scientists.  Many of these well-paid occupations are amongst the fastest growing in our national economy.

Cultivating a school garden grows more than plants.  It’s an outdoor lab where math and science is indeed alive.  Learners really are citizen scientists and do the work of their future profession by conducting experiments and carefully observing in this outdoor learning lab.  Thank you to our educators for cultivating the right conditions to inspire the next generation of STEM professionals right here in the beautiful Oxnard Plains.

Thanks to the forward thinking districts with educator ready to roll up their sleeves.

Thanks to the National Wildlife Federation support to help this seed of an idea to take root.

Thanks to Amgen Foundation for their investment right here at home.

But Here’s Another Story: The People Behind the Scenes

I strolled into the coffee shop and glanced at the newsstand.  Front page was an article about the FIRST Robotics competition. With support from OC STEM Project Acabado, OUHSD was able to fiel 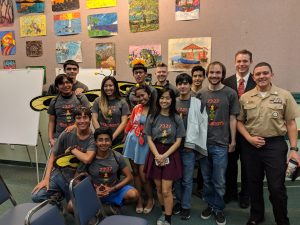 As a result, VC Star reported,

“The Rookie All-Star Award went to the Metal Jackets, a brand-new team from Oxnard High School. This win takes the Oxnard team to Houston, as well. Their robot, named Sparky, will compete with other world champion robots.

“We’re super excited, it is our first year so we really didn’t have much context going into the competition,” said Oxnard High School Principal Richard Urias. ” … It turned out our kids and coach did a pretty darn good job.”

Urias said the interest in robotics and mechanics has grown so much this year that they plan to implement a new career pathway for students with those interests. Their team consisted of about 20 active participants in an after-school club, but by next winter, their adviser hopes to have an after-school class for credit for those participating.

“The kids loved it. They had a great time, they learned a lot,” said Nick Peterson, the team’s teacher adviser. “Some of the kids made statements that they learned more in these six weeks than they learned in all of high school because it’s just so applied.”

This is a fantastic story about our future STEM professionals.  It is their photos in the paper.

But here’s another story.  It’s the story behind the scenes of administrators and educators investing in partnerships and dreaming big.  Connecting students to opportunities can be arduous and even tedious work. Our newspapers have been busy with stories about Parkland high school students leading a national movement.  Behind the scenes of Marjory Stoneman Douglas High School learners had already been supported by an award winning journalism program led by a teacher and an inspiring AP Government teacher. Those teachers became the bridge for the Parkland student to claim their own place in history.

The people behind the scenes have often provided a foundation for unlikely newsmakers to change the path of our national story.  Myles Horton started the Highlander Folk School in 1932. Born in Savannah, Tenn., in 1905, Horton longed to start a school that would help poor Southerners confront the forces that oppressed them.  Most people know the story of Rosa Parks as simply a story of a tired woman looking for a seat on the bus. She was an alumna of the Highlander Folk School. So was Martin Luther King Jr. “Long before we started sitting in, long before we’d been on the freedom rides, some of us got our foundation … at Highlander,” says Georgia Congressman John Lewis, who visited Highlander as a college student.

The story behind the scenes is worthy of being told–in part because they deserve our community’s gratitude.  More importantly, it shines a light on what we can all do to ensure that those we serve claim their place when opportunity calls.

Thank you to just a few of the individuals who are working so hard behind the scenes.  Your work matters and your community is grateful. Superintendent DeLeon for investing in vision and relationships. Assistant Superintendent McCoy for dreaming big and going big. Director Chandler for connecting an array of dots. Principal Urias for being such a great cheerleader for the effort. And a heartfelt thank you to the family, friends, mentors, and educators who strive to cultivate the next generation of STEM professionals who point to the Oxnard Plains as their childhood home and the birthplace of their professional passions.